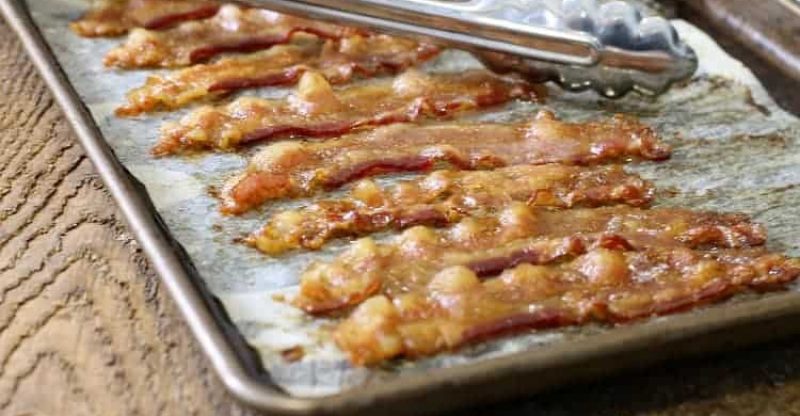 We often think of cooking bacon in a pan, which always makes some nice and crispy bacon that goes great with eggs. Lately, there has been a growing trend for cooking bacon in the oven over the traditional method. Let’s find out why using an oven can get you crispier and tastier results.

We all love how bacon has such a great crunch and needs time to absorb all that grease once it comes from a hot griddle. We don’t realize how much grease comes from a single slice, let alone more than a few slices inside a hot sizzling pan. The real trick is to remove these slices before they get burnt and put them on a paper towel or a cooling rack so they drain off the remaining fat.

Well, fat chance, since you’ll likely get bacon that’s soggy in some spots and crispy only on the edges. Most of the time, you need to chase the remaining fat away by dabbing with a paper towel. This can even break your bacon in the process making little bits and pieces not very fun to eat. About the only good thing is that you can drain your bacon grease into a container to use it later.

Oven bacon is more about control and getting better results. You can get crispier results because the bacon is usually sitting on parchment paper and soaks up the grease, but that is just one method… Oven bacon isn’t limited to pork, as you can make all sorts of bacon slices in the oven including streaky bacon, beef bacon, and collar bacon. There is also back bacon and rindless bacon.

You might enjoy thicker cuts such as Canadian bacon and uncured smoked cut bacon, or alternative brands like turkey or veggie bacon. But honestly, those last two don’t count as real bacon because they’ll never cook up or taste like the real thing. The real beauty of oven bacon is that it’s simple and doesn’t make as much mess as using a frying pan!

Let’s start with oven temperature since this will give you the best results. You want to have the oven set to no more than 400 degrees Fahrenheit. Anything over this is just asking for burnt bacon. You also need a cookie sheet or a similar pan that has a lip around the edge. This prevents bacon grease from getting anywhere except in that pan. The next oven methods usually differ from this point.

Some recipes like to mention placing your bacon onto parchment paper so it absorbs the grease. Others will include putting aluminum foil under the parchment to help with grease clean-up. Then there is a method that places your bacon on a cooking mesh so the grease drips underneath. No matter which method you use, you still need to take the bacon out of the oven and put it onto a cooling rack lined with paper towels.

Making your own bacon tray is a great way to yield crispy bacon without the cleanup. Simply crimp a sheet a foil as shown and lay your bacon across.

The most popular cut that most people will always love is the streaky bacon. This is the kind that you see in packs sold at the store that are no thicker than a nickel. If you like thicker cuts, they can take longer to cook, but this also depends on the type of bacon you’re cooking in the oven. Streaky bacon has a lot of fat that shrinks quickly, which is why you have crunchy strips whereas meatier strips usually have more chew involved.

Stick with a quality brand that isn’t costing so much and don’t buy the precut bacon that comes in packs. Save yourself some headaches and have the butcher slice thin strips from a nice smoked slab of uncured bacon. From that point, you can ask for the thickness that you like the most. Give them directions or cues such as ‘penny or nickel thick’. Half-dollar thickness is fine if you like country bacon.

Remember how collecting bacon grease is important after you’ve cooked your bacon? Well, there are some things you do and things you want to avoid when starting this process. You want to elevate your bacon on a cooking mesh. This isn’t your typical cooling rack so look for the type that has cross-hatched wires that support as much of your bacon as possible. Don’t put any parchment paper on the bottom, it just gets mucky!

Cooking bacon on a wire rack isn’t worth the trouble. Just line a tray with foil and bake for 10 minutes then rotate the tray and cook for an additional 5 to 10 minutes. It’s simple and yields great results – best part, there’s virtually no clean up.

After you’ve cooked your bacon let your oven cool a little bit so you can remove the mesh cooking rack. Let your bacon reach room temperature so it turns slightly white. After this, you can take a spatula and slowly scrape up sections to collect in an old jar. Remove any strange pieces or little pieces of bacon that have fallen in. This leftover bacon grease can be stored for up to 3 months in your fridge and reused for endless dishes.

After this, you wipe down the inside of your baking pan with a paper towel and toss it into the washing machine. This makes cleanup a cinch without oil getting everywhere when it’s still warm. 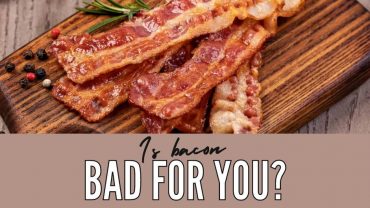